As many DevOps quality assurance testing teams embrace the possibilities of artificial intelligence, they will also uncover many benefits AI test automation can have on their business lines. There are many hidden costs associated with building software. Testing is often overlooked. Once a DevOps team burrow down that rabbit hole, they soon discover the need to invest in testing. However, testing can present its challenges. The largest issues testers face are:

What is artificial intelligence?

Artificial intelligence is a machine’s ability to learn, simulating how a human thinks and learns. It’s just one branch of computer science necessary for machine learning. AI learns as a result of algorithms and large data sets used to train computers.

There are four types of AI:

I often refer back to the customer’s burning desire scenario when evaluating B2B needs. One of the two principles I speak on is a product that reduces a customer’s costs. When you introduce a tool that will significantly reduce a company’s cost, they will gladly pay for the tool.

With regard to testing, many man-hours can be saved when the right tools and methodologies are practiced. For example, regression testing often is fulfilled manually. Manual testing can be time-consuming, cumbersome to maintain, and prone to human errors. Thus the dire need for automation.

Automation testing is a vast improvement from manual testing. Automation is great for repetitious tasks. However, AI enhances test automation farther. Many ask, how do you use AI for test automation? I’ll reference the example of Netflix. The streaming media company uses artificial intelligence to learn data of a user’s watch patterns in order to recommend content in the future.

As mentioned, frequent changes to an application’s user interface often plague QA testers. Even small UI changes can present big problems. It is best to let AI recognize changes and alert the tester rather than wasting time learning of test failure, investigating, and rewriting test scripts. 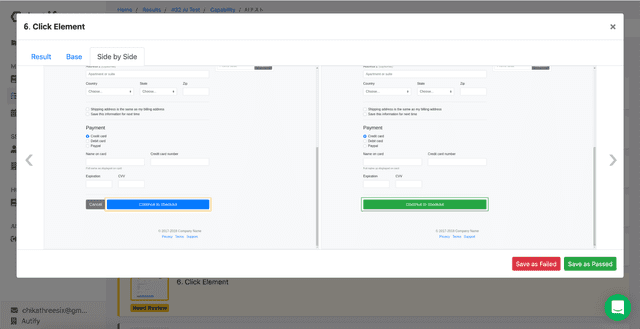 One great tool that solves this problem is Autify. It is an AI-powered test automation tool, unlike Selenium, it does not require coding to master. With Autify, running tests simply do not fail because of UI changes. AI detects these changes and shows the tester a side-by-side screenshot comparison and allow them to make further decisions based on the scenario.

Test maintenance is one of the greatest pain points for QA testers. Especially at scale in a rapid development environment. Constant changes in the UI can compound this issue. Time-consuming maintenance can be handled by AI. It’s best to let the machines do the tedious work and alert us of possible failures. Many man-hours spent on maintenance can be saved and efforts can be used for more innovation elsewhere.

As testing platforms grow, so will the technology behind it. There is a shift for no code testing automation to empower more than just engineers. Non-engineers can use platforms like Autify for test automation. With the addition of artificial intelligence, many problems as previously discussed are alleviated. To go beyond that, machine learning at deep levels must be achieved.

In an article, we illustrate practical examples of how companies are using ML to solve problems. For example, Airbnb uses it at scale to feed its algorithms massive image data in order to train the model to learn amenities and objects in photos. They saved significant time and resources had this task been deemed for manual human intervention. This development tool opened possibilities in the future to allow machines to decipher amenities in uploaded photos- rather than relying on user-generated input.

We have illustrated how AI can improve test automation. AI can help reduce costs while saving time, even with frequent UI changes, machines can consume big data, maintenance nightmares can be avoided, and lastly, machine learning can further enhance test automation. If your QA team is seeking an AI test automation tool that is easy to use and highly effective, then give Autify a free trial today!