In software testing, there are tests run at various layers of the application. In this article, we will focus on the entirety of the software when testing. We account for all interconnected systems in this array. This is referred to as E2E testing.

E2E testing, also known as End-to-End testing or called User Interface testing is a software testing technique that tests the entire system from beginning to end to ensure it works properly. E2E testing is usually performed after functional testing and system testing.

Testing is simulated from the perspective of the end-user. There are many subsystems involved which may include; network connectivity, web services, database connections, and other applications or dependencies. If any of the subsystems fail in an E2E test scenario, the entire system could fail.

For example, if a QA tester is testing the login section of an application and receives an error message because there is a database connection error- the test scenario would result in a failed result. This leads to my next point…

Why are E2E tests important? 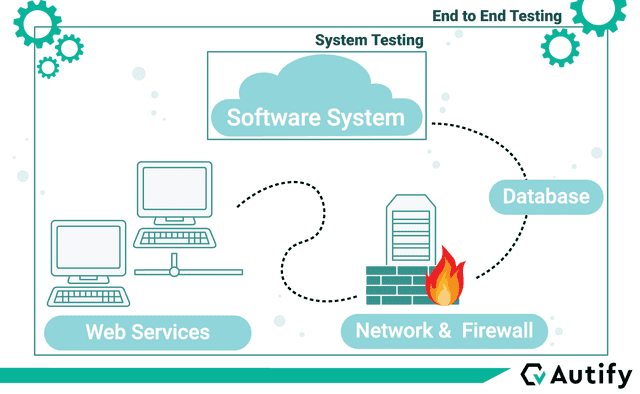 In modern software development, since every system is interconnected it is important that they all be tested from the frontend to the backend. Above is a simple illustration showing how a cloud-based app could perform. When system testing, QA testers focus only on the internal system and functions. However, E2E tests account for many other factors within the internal network such as databases and external resources such as 3rd party APIs and web services. It is important to test the entire system simulated as a real user to ensure accurate expected results.

Unlike unit testing, with E2E testing there are many outside variables that can skew test results. For example, network access, database connection, or a file permissions issue can occur. As a QA tester, have you ever tested and experienced “500 internal” errors when the expected results should have been “200 OK” pass? This inadvertently could have been caused by a permissions issue or firewall issue at the production level- which does not exist in the Dev or QA environments.

How to create E2E test cases?

There are three main reasons why. First, it is easy to use and does not require coding. Second, it can drastically reduce testing time in the software development life cycle. Third, maintenance is handled by AI, so less time is spent on fixing broken tests which can be allocated to more innovation.

Using our software, QA testers can screen record tests. This is extremely convenient to perform tasks like mouse clicks and movements rather than coding them. Each step of the testing process can be examined individually or holistically. Results can be compared side-by-side. Furthermore, tests can be run on several web browsers and mobile devices simultaneously.

When we spoke to one of our clients, Ken Kakizaki QA team manager at GA technologies, he shared with us how using our AI testing software has reduced test authoring time by 95 percent.

To further elaborate. Their challenge dealt with a vital web form their users were experiencing issues with. Initially, they used our software to check if the form was even displaying. Then they expanded test conditions to determine if it was rendering properly by checking for CSS assets, and eventually validity of form data.

“When we were using Selenium or Cypress, we would have had to reluctantly investigate the cause if a test didn’t work well. To investigate the cause, the first task is to prepare a verification environment for investigation and redeploy the code that was rolled back to build the environment. All this was just to get things ready to investigate, and it would take us three to four hours. After that, the real investigation for causes begins. Work that used to take hours or days for one problem can now be done by taking about 15 minutes per day to confirm.”

Many do not factor these quantitative analyses, however, when you account for the TCO of software development- these types of time-savings can impact the company’s overall bottom line.

When E2E testing applications, QA teams should have access to superior tools to make their workflow easier and functional. Manually testing software can become cumbersome and costly, especially if there are frequent UI changes. Automation tools today are smarter and can be used for more than just repetitive tasks. With machine learning, they can become cognitive- learning complex patterns and alert testers of changes rather than failing at changes. It is vital that software testers evaluate the entire system including their sub-systems in production environments. With Autify, tests can be recorded, evaluated, compared, and tested across multiple devices. Give it a try today!